You’re singing it in your head right now. Aren’t you.  Yes, you are.  Admit it.  It’s practically an unwritten rule that when anyone hears the words “we are family”, they will spontaneously burst into song followed by the words, “I got all my sisters and me.”  I‘d stake my last Devil Dog on it.  Oh, yes indeedy!

Chatterbox, in Italian, is pronounced “Yak-uh-share-owna”.  This, I learned, among many other things this weekend. It was chock full of long-overdue time with my brother and sister-in-law and their kidlets.  My own children were fairly bouncing off the walls at the opportunity to see their beloved cousins.  They love them dearly.  And Sweetboy, in particular, has a deep and abiding affection for family members who do not live in this house.  That is not to say that he doesn’t have an affection for family members who do live in this house; just that he loves those who do not extra, with jimmies on top.  (Or, sprinkles, as those of you below the Mason-Dixon line call them.)

Just how much does he love them? He was so excited to have a “sleepover” with the long-lost cousins (we saw them at Thanksgiving), that he sacrificed his bed, for three nights, for the camp cot (in the same room, of course!) While his older cousin, let’s call him Buddy, got to snuggle down into the cozy fleece sheets on his bed, Sweetboy enjoyed, and I truly do mean this, a sleeping bag spread out on the cot.  I asked him how he slept after that first night’s slumber.  His response?  “Fine. Great.  I was with Buddy!!”   ‘Nuff said.

And, I must admit that I love my Sweetman’s brother and his wife somethin’ fierce.  And not just because my sister-in-law is first generation Italian and teaches me all sorts of fun phrases that make me snicker.  I genuinely enjoy them. We love nothing more than sitting around the table enjoying a delicious homemade meal, a nice big juicy Cabernet, and a rousing game of Spades. (The girls won.  The girls usually win, don’t we, Sweet Sister-in-law? And it has nothing to do with the fact that we sometimes give each other a head’s up when we have a bad hand. Ahem…)

My niece, let’s call her Bia, is on a new-to-her gluten free diet.  Whenever we get together, The Gammy makes a delightfully delicious 2-layer chocolate cake with a whipped frosting in the middle. (Now that I think of it, it’s an awfully lot like a gigantic circular Devil Dog!)  Everyone enjoys this cake, but Buddy and I have been known to engage in some Dueling Forks over the last piece.  I always let him have it, of course.

But, with the snow a blowin’ and the winds a howlin’, The Gammy and The Grampa weren’t able to make the hour and a half drive up to see all of the grandkids.  Everyone was crushed. God is good, though, because at the grocery store the day before, I noticed that good ol’ Betty Crocker had come out with a Gluten Free Devil’s Food Cake boxed mix. And the angels – they were singing. So, I bought it, because, HELLO?  Have you met me? I don’t bake!

It turned out to be a really tasty cake.  And that there is not only my professional opinion, but that of all the kidlets under 40, too.  Here’s a picture for those of you so inclined to check it out.  (We used traditional frosting in a can, because we live high on the hog around here.)

The kids sledded, built a snowman, rose each morning far earlier than any child should be allowed, set up a grocery store in the playroom, and snuggled in and watched a movie together, among other things. There was a little Texas hold em’ goin’ on, a rousing game of Yahtzee (man, I love that game!), and we ate like “gabones”, as my sister-in-law would say.

The most comical (and there were plenty!) conversation of the weekend, however, went a little like this:

Sister-in-law (to her husband): “How come you never tweet at me?”

And the best one-liner went to Sweetboy.  “Sissy, you’re da bomb diggety, you know that?”  (Man, I love that kid!)

Let’s close out this sweet little familial recap with some pictures, shall we? 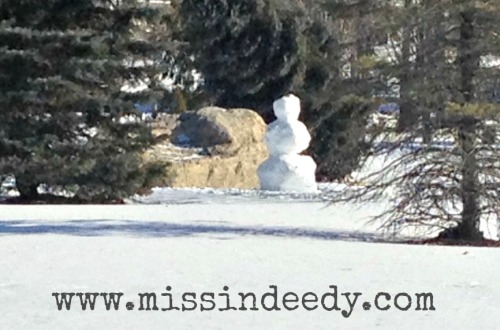 13 thoughts on “We Are Family”