Sweetman’s blender blew up last week.  This was cause for a Five Alarm Freakout, as he uses it every. single. morning. to make his healthy shake.  A shake, mind you, that he’s attempted to get me to try no less than 22 times in the last 4 years.  I’ll give him an “A” for persistence.

Anywho, Sweetman is a bit of a health food nut. He puts approximately 42 ingredients into this poor blender and expects it to just be up and attem’ every time.  (I kid.  He only puts 10 ingredients in there.)

I’ve attempted to explain to him that if he’s trying to pack that much “health” into one blender, it’s bound to explode.

He just sighs at me.

I wink back at him.

It’s the way we roll.

The irony is that I had just taken a picture of the before and after of The Shake Process to send to my friend who wanted to know what all was in it.  She suggested I post it for those of you sweet souls who are into that sort of thing.  You know… healthy stuff. 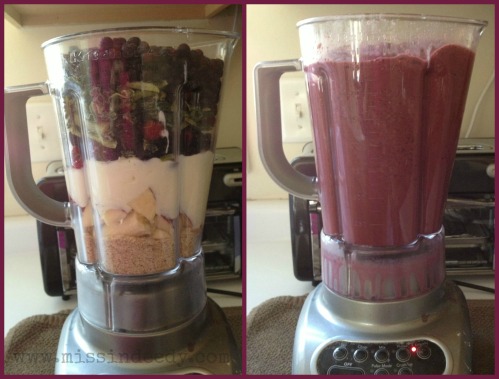 He blends the flax and oats together first into a fine powder. (I asked him why he doesn’t just buy already ground flax-seed, by the by.  He claims they lose some of their health properties once ground – so potency is, apparently, key.  Whatevs.)

He then adds all the rest and blends it up for a good 1.5 minutes.

Hopefully, your blender will last a good while before going on strike.

* Sweetman most certainly does not need to know this, but, I don’t actually mind The Shake.  I just have to pretend that I can’t stand it so that I don’t end up drinking it every morning for the next 4 years.  Do ya feel me?*

15 thoughts on “Making The Shakes”