It’s official: Dentists are dead to me.

I was pretty sure that we were coming to this when I had that fateful dentist appointment a couple of years ago.

But this?  This takes the cake.

And frosts it with cavities.

Poor Sweetgirl.  We have just returned from her semi-annual dentist check up.  She’s had a stellar report each time that we’ve gone. We brush. We swish. We don’t floss. But, hey, we don’t live on candy around here, either. Neither child drinks the usual suspects for cavity inducing liquids.

So, we expected a great report again.

Sweetboy had just gotten a great report again, moments before.

And, Sweetgirl has the cutest little pearly whites I think I’ve ever seen! And I’m only mostly biased. 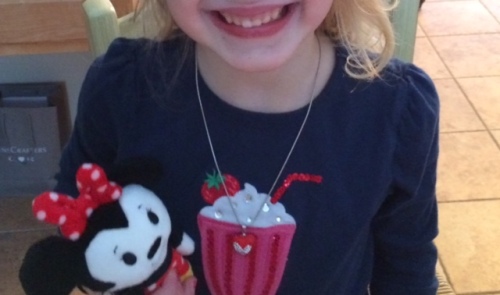 Seriously? What’s not to love about that smile?!

Apparently though, she did not get my healthy toother genes.

She bravely marched into the x-ray chair for the very first time this morning, all smiles and cute little pearly teeth. She opened wide and allowed the hygienist to arrange the spacer thingy in her mouth for the optimal viewing of her tiny teeth.  She held still.

It was for five seconds, but PEOPLE! She did it!

We returned to our room and she hopped up into the pink (coral) chair to pick out her prize from the revered Prize Box.

Not so fast there, missy.

“Oh, Sweetgirl, you have some boo-boos on your teeth,” the Dentist said in his adorable Argentinian accent.  (I may give him a few extra points for delivering such devastating news in such a pleasant way. MAY.)

I immediately jumped out of my seat. “What kind of boo-boos?”

“She haas seeex cavities on her lowers teeth,” he calmly said.

Sweetgirl said, “But, is the medicine to fix them PINK?”

I kid you not.

He then gently explained that this will require two separate visits, laughing gas, Novocaine, and a viewing of Frozen.

I asked him if he could pass some of that laughing gas to me.

He was not amused.

So, clearly, I am going to have to pray about my stinky attitude toward all Dentists who are not from Argentina.

I’ll do that while I’m at the drugstore trying to find children’s dental floss. That’s pink.

7 thoughts on “Dentists Are Dead to Me”