I graduated from High School. (You’re going to have to put that sentence together with the title, folks. Otherwise, you’re going to think I’m making a grand pronouncement that happened nigh on 25 years ago.) I’d only been driving for a year, as you have to wait until 16 to get your driver’s license, down in FLA.

Full of myself, I thought I knew most of everything. (Knowledge, where for art though, now?)

And then, I left for college.

Seventeen, and utterly ignorant. Of much.

The University of Alabama was kind enough to allow me entrance. A student with the most un-studious of habits. The Gamma Phi Beta House became my home away from home. Fraternity Row became my neighborhood. The Varsity became my kitchen.  Bear Bryant stadium, my backyard.

College life hummed along pretty nicely for about 3 months.

Until I came home with my first semester’s grades.

You did not read that incorrectly. There was, indeed, no number in front of that decimal point.

And Ahab gave me The Talk. In a very matter-of-fact way, he shared that not going to college was no skin off his back and that the only one I’d be hurting was myself. He asked me to take the next couple of days to think it over and come to a decision.

And then he directed me to pull weeds out in front of his shop for 6 hours.

In the heat of the South Florida sun.

That will help clear the weeds from your head.

If it doesn’t kill you first.

I can tell you one thing I decided for sure, I didn’t want to pull weeds anymore.

And, I also knew I wanted to head back to college.

I got my head screwed on straight, put my nose to the grindstone, and any other cliche` I could possibly throw in there, and got it done. By the time I graduated, I had made the Dean’s list many times over.

Because, in the midst of it all, I met The One.

He gently nudged my heart into a rhythm of grace. He brought precious friendships into my life to remind me that He was everywhere I was. And He pursued me, relentlessly.

I clung to Him.

Until, I started to think I could do it all on my own, again. And I pushed Him out, becoming more open to falling from Grace.

Which I surely did. And landed with a thud.

I can see that now.

His hand through other hands which ministered to the bruised spots from landing so hard. Soothing words that healed and gave hope.

When I was seventeen, I thought I knew it all.

Oh, how wrong I was!

Grace had so very much to teach me. 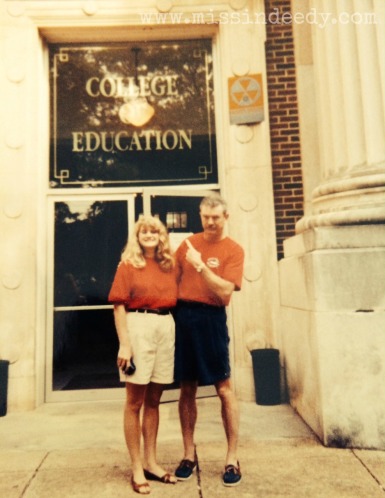 This post is day 17 in the Write 31 Days challenge.

To those of you reading along, thank you!

3 thoughts on “When I was Seventeen”