Sweetman came home, the other day, with a boxed set of “Christmas Classics” DVDs. We only wanted Rudolph the Red-Nosed Reindeer, you see; but, we missed the buying boat for just that one. Everyone else had already been there and bought that.

Because Sweetman is brilliant (and really, because he knew coming home without the movie in-hand would cause a mutiny), he bought the boxed set. All for the low-but-actually-not-so-low price of 2 Many Dollars. It includes Rudolph, of course, and Frosty the Snowman, and The Little Drummer Boy, and Santa Claus Is Coming to Town, and a couple of other “original” classic Christmas movies.

Except, I don’t remember some of these movies as being classics.

In fact, two of the movies included are Mr. Magoo’s Christmas Carol and Cricket on the Hearth. I’m sorry, but I’m pretty sure I would have remembered a “classic” about a young woman going blind from shock, and a crow sent out to murder a sweet little talking cricket, and Brandon Thomas’ toothy grin as he narrates it all. Oh, I especially would have remembered that. That’s the stuff of nightmares, folks. Oh, yes it is! No matter how delightfully Mr. Thomas croons about the birth of The Savior.

Anyhoo, one of the movies that I had plumb forgotten about, was The Little Drummer Boy. We snuggled in and began watching. Five minutes into it, though, I considered the choice a mistake.

“WHY did they kill his parents, Mama?” Followed by, “But WHY does the little boy not have people who love him?”

And then, the tears!

I’ll be honest, I wanted to have a stern word with the folks who thought this kind of story line was a good one for children. Until, of course, I realized I’d likely be yelling at a bunch of dear elderly persons in a nursing home.

Sweetboy interrupted my imaginings by innocently asking why the little drummer boy wanted to be alone with the animals and why he hated people?

And, I realized with a start that I had one of those rare golden parenting opportunities. We, parents, only get this kind of opportunity every-so-often. I wasn’t about to let this one go by with a shoulder-shrug.

As two expectant pairs of eyes stared at me, I realized how many directions I could go with this conversation. Anger is an emotion all humans experience. Death is an experience all humans will eventually meet with. And, hatred is something none of us ever wish to encounter, but far too often do.

Where to start? How far to go? What words are appropriate for a six and eleven-year-old?

The words I chose were the ones that were the simplest. And the most truthful. I asked them if anyone had ever hurt their feelings. When each said yes, I asked them how it made them feel. One said sad, the other said angry.

Ah, yes. Emotions that we all feel.

We talked through some of the ways people respond to others when they are angry. Or hurt. Or sad. Because, really, sometimes they’re all bumping up against each other. Right?

I asked them why they thought Jesus came to earth as a baby. That was a tricky one for Sweetgirl. But Sweetboy? He nailed it. “So we could be in God’s family.” 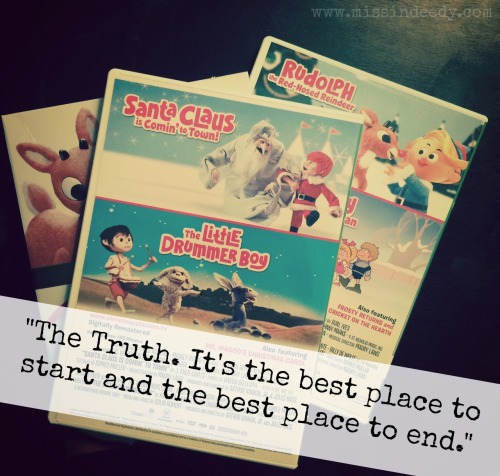 They both got antsy, after that, and asked me to press play. We watched on as, in the end, that little drummer boy was able to give away his most prized possession out of love. Love that was placed in his heart, and is placed in ours, for the purpose of overcoming the anger and the hurt and the sadness.

It turns out, The Little Drummer Boy still rocks! He may be stilted in his movements, but the heart behind his story beats strong among us all.

6 thoughts on “Why The Little Drummer Boy Still Rocks”