It’s been raining on and off since we arrived here in Not-So-Sunny-Florida.  We are, however, with a Nana and a Captain Ahab that we haven’t seen in a good long while;  and, so, we’ve been enjoying each other anyway.  Imagine. The Captain, however, is up to his same old tricks.  I haven’t  come up with a catchy name for the debacle that occurred this morning yet.  It could be called Watergate.  It really could.  But that’s already been taken.  Here’s the gist:

Ahab: “Let’s run the kids over to the beach to check the ocean before the day gets rolling.”

The sun was sparkling across the water and peeking out just enough at 7:00 in the morning to give us hope for a decent day. We grabbed hold of that hope with a little more zeal than caution would warrant for the skies that were overhead. Can I just stop here a moment to tell you all, (all 8 of you), how poignant it is to watch my children walk the beach early in the morning with Captain Ahab?  That same daddy walked me and my brother when we were their age.  Oh, how the beach shell turns… 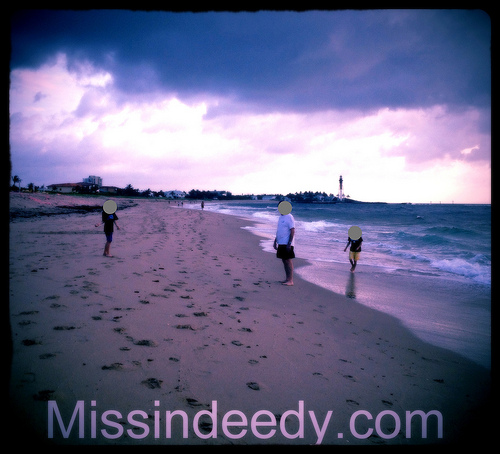 Far longer than a “short beach run” later, we arrived home soaked to the bone.  You see, Captain Ahab thought it would be a mighty fine idea to walk the kids (including the littlest – Sweetgirl) all the way to the jetty.  And back. From where we started out, it was a good quarter-mile (or more) there, and then another good quarter-mile or more back.  That would have been great if we just had the two 9-year-old boys.  Alas… Halfway TO the jetty, Sweetgirl started telling us that her legs were tired of All The Walking.  Not a good sign.

Just about the time Ahab and I realized we should probably start heading back from the jetty, the skies decided to get angry.  We tried to shuffle the kids away, but dang it, there was a hot-pink mask washed ashore that was just Sweetgirl’s size, and a half-dead sea fan that begged to be brought back (despite the stench); not to mention the two turtle hatchling eggshells we found.  Oh, The Excitement!  Unfortunately, all of The Excitement made trying to hurry them along kind of like herding cats.  Only, harder. 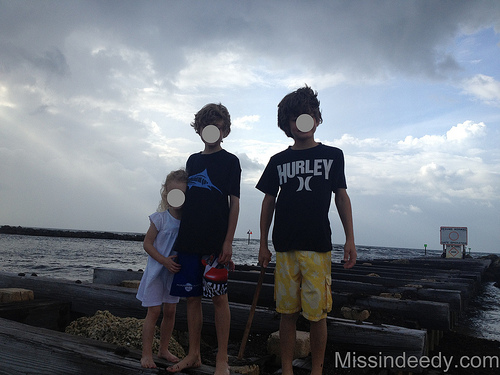 Happily at the Jetty

All that to say, about 2 minutes into our 15 minute walk back, the skies opened up and rained on our beachy parade.  Here are a few things I heard from the lolly-gaggers before one of them needed to be picked up to keep the party moving along.

Sweetgirl: “My Eyes!  My Eyes are getting wet.  See, Grampa?”

Cousin:  “Can I just go ahead and jump in the ocean and go swimming?  I’m already wet!”

We did make it back. Wet, but happy to have enjoyed the adventure.  And to have made it back without getting struck by lightning. Obviously. As, I’m now sitting here in the comfort of the house telling you all about the latest adventure “abroad”.  Only, “abroad” is really just down South from up North.  Indeed.

Sweetboy’s stim is hopping; and he’s done more than his fair share of it lately.  We assume it’s anxiety over the transition as we end the current school-year. And, frankly, we’re a little concerned that we’re going to wake up one morning and find that this kid has sprouted long ears and a fuzzy bunny tail.  Sir-Hops-A-Lot frequently tells us that his legs or feet hurt, but he insists that “It’s NOT because of the hopping”.  It’s a veritable conundrum wrapped in a quandary.

This is another one of those moments where I’m torn in emotion. No, that’s not right.  My emotions feel shredded like so many ribbons tonight.  Why did God give us a child who can trample all over my heart with a few errant hops?  And then again, why the hell am I so ungrateful for the pure unadulterated beauty that this child brings into our lives?  I’m sorry.  Crass. I know.  I’m feeling some pent-up angst.  I blame it on the rain.  And now, I have that stinkin’ song in my head.  It’s entirely possible that you do, too.  I’m not sorry for that.  Someone should share the agony of having a Milli Vanilli song planted in their head with me.  Misery loves company and all that jazz.

But now? Now, I’ve written some of the vitriol out and it feels better.  And instead of pretending that I didn’t feel raw enough to write about it, I’m going to leave it right here.  Right where I can find it when I need to be reminded that, “Ah, yes, I’ve felt this way before. And I lived to feel like that again.”  Or even better, so that I can be reminded the next time that there most certainly is sun after rain.  It’s usually in his hug. Or his gorgeous guffaw.  And I’ll remind myself anew that I live under an umbrella of grace that is bigger than any emotional tirade on my part.  And I will be thankful.  Oh, yes indeed.  I will be thankful.